… I’m still on track (for greatness).

(PLUS, I reveal the new book cover for the re-release of ‘Sportiveur’. Exciting times.)

Once Upon A Time, In A Garage Far Far Away

Quick catch up: in order to get back into the habit of cycling regularly, I’ve committed to riding every day until February.

Since I started my challenge on 27th December (which is well-known to be an auspicious date), this means that I plan to ride my bike for 35 days in a row.

The rules are simple:

The objective is to work my ‘habit muscle’ as much as it is to rebuild a little fitness. The 15 minute minimum time limit is set so low in order to make any excuse for not riding unacceptable.

So How’s It Going?

So it seems to be working. I’ve ridden for a run of 18 days straight now (which feels quite nice to type, actually).

In total I’ve racked up 10 hours of time on the bike, which averages to about 4 hours a week and 34 minutes a day. 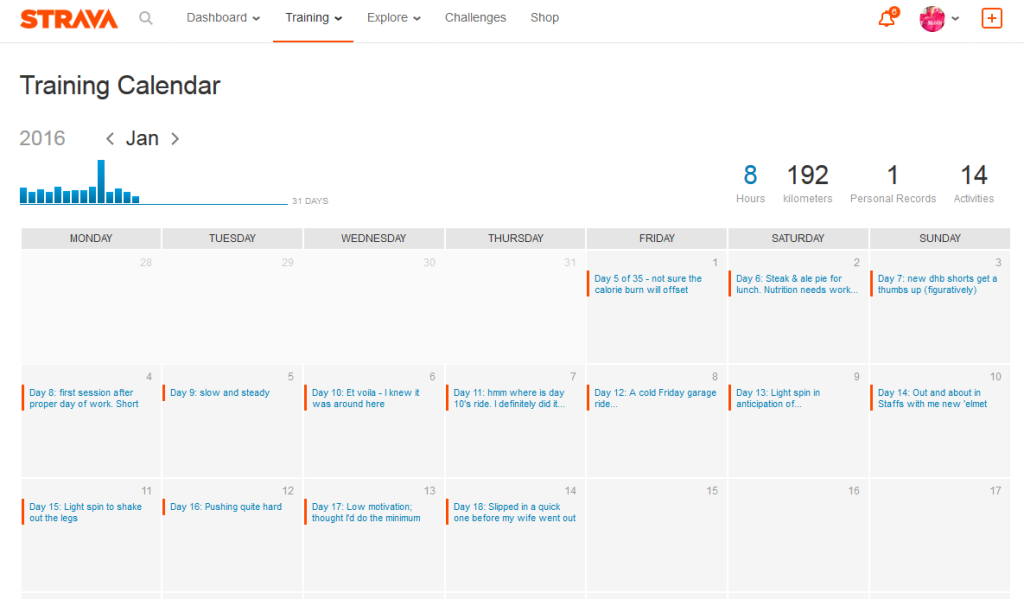 I reckon that if I’d set myself the challenge of riding 4 hours per week in each week of January, I wouldn’t have lasted much past week one (or it would have required considerably more willpower than I’ve employed so far).

For the achieving long term goals, it’s all about the systems you put in place, not the willpower you engage.

And the fact that I’m spending mid-week evenings torturing away in my cold, damp garage, makes me look forward at the weekend to leaving those breeze-block confines, and riding on the road, almost irrespective of the weather (almost…).

I’m not sure I’ve detected much of an improvement in fitness, or my performance levels session-on-session. It feels unlikely that my approach would be the one employed by British Cycling in order to prepare its riders for Rio.

Still, you’d like to think that I am slowly reacclimatising to the bike and that, by February, I’ll be in a much better position to instigate a more structured training programme (ha, chance would be a fine thing) than if I was coming at it totally cold.

Another demi-habit that I’ve been attempting to put in place is to weigh (and fat-analyse) myself every day. Annoyingly there isn’t sufficient floor space in our bathroom to keep my scales there (and they don’t work on soft floor surfaces elsewhere in the house), but I have got into the habit (I hope) of taking them with me (and weighing myself) when I have my post-ride shower.

The headline result of my mass-fat tracking is that I’m pretty much the same weight I started at and my body fat percentage hasn’t changed much either. This is as I’d expect. I haven’t changed my diet at all, and I doubt that the extra calories I’m burning amount to much more than a hull of beans.

What I hope this weight monitoring will do is to avoid me fooling myself into thinking that I’m doing all this exercise and therefore deserve to replace some/all/more than these calories with ice cream and salted peanuts (not together… maybe together…).

You may recall from an earlier post that I’ve been working with designers in order to produce a more professional book cover for my book, “Sportiveur: A Beginner’s Guide To Training For, Completing and Enjoying Your First Sportive”.

I ran a poll to see which cover was the most popular amongst the Sportive Cyclist massive.

…Not my favourite. In fact it was probably not in my top 3. And despite reading a lot about product testing (which tends to show that individuals struggle to predict which will be the most popular of a given thing), I was still surprised.

But after giving it some thought, and considering the many comments that participants in the survey were kind enough to provide, I decided to go with the madness of crowds and select the winner of the poll as the final design. 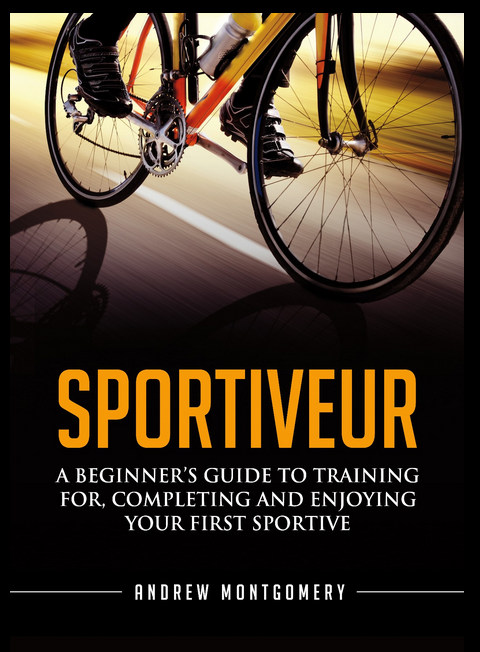 I was particularly influenced by those people that commented about the need for having men and women on the cover, or to put it another way, not being too men (MAMIL?) focused. It’s a very good point and maybe one which I should have put in the brief. Hey ho.

Anyway, with the new cover design decided (and paid for), I need to pull my finger out and give the book text a good run-through with a toothy fine comb, and get the whole thing relaunched.

You (yes, you) will be the first to know.