Birmingham* is full of surprises. It has a nice new station (or rather, the old one just got a face lift). All the cool cats are making it their UK headquarters.

(*Ameri-fans: for the avoidance of doubt, I’m talking about Birmingham in England, not the one in Alabama, Connecticut, or Kentucky (where it is a ‘sunken town‘?!?)).

Birmingham also has an exhibition centre. A National Exhibition Centre. Where, this weekend, bikes were exhibited. And I went along to have a gander.

Here is my photo journal.

Here Is The Entrance

I went through this entrance. It didn’t take long because I had printed my ticket beforehand and there were no queues.

I didn’t say I was any good at photo journals.

Garmin had the stand that faced the entrance. Whilst everyone else admired the Edge range of bike computers (which you can see in many a bike shop), the much rarer Recon Jet GPS ‘smart’ glasses lay unwatched and unloved. Sad face. 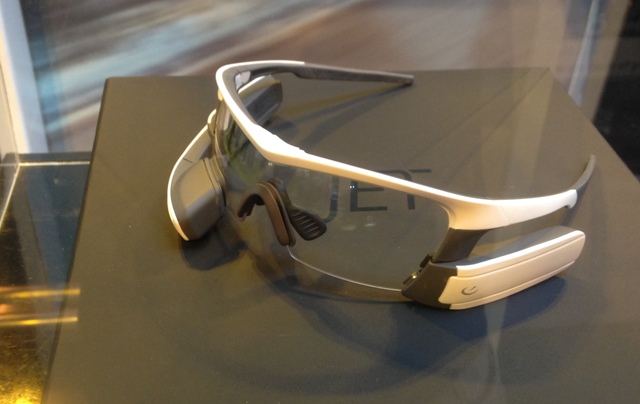 So I tried them on (much to the surprise of the guy in the background). 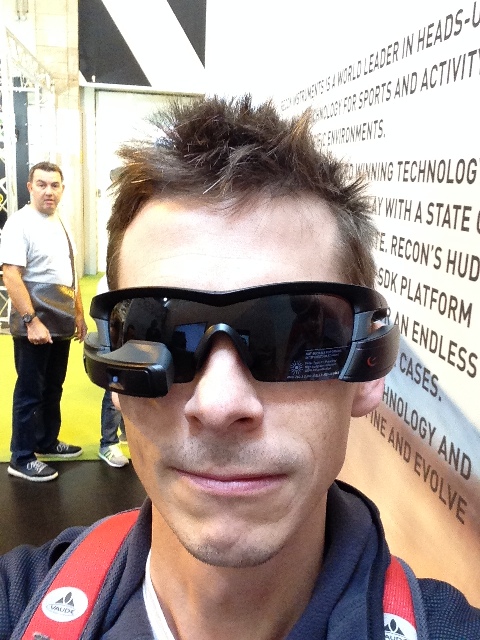 I think I look quite cool. They sort of provide you with a fighter pilot style head up display.

(If you want to know what they do exactly, DC Rainmaker here provides chapter and verse).

I’ll say it again. I think they made me look cool…

‘Static’ cycling seemed to be a key theme of the show. Plenty of stands demonstrated turbo trainers hooked up to computers and big screen displays.

Like this one from bkool. The bloke’s feet are spinning so fast, you can’t see that they’re clad in finest patent leather slip ons. Also, those boxes rather detract from the high tech feel… 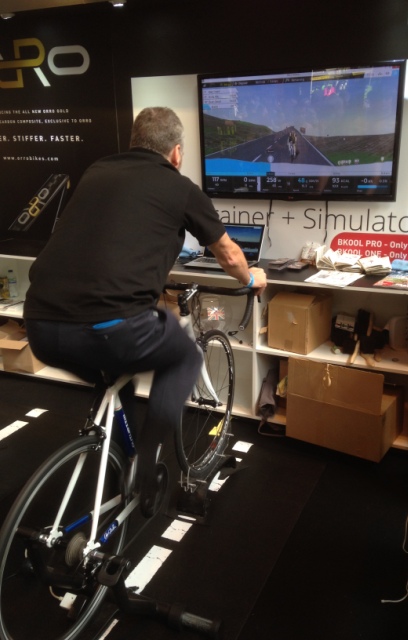 Mind you, the Elite stand wasn’t a great deal better: 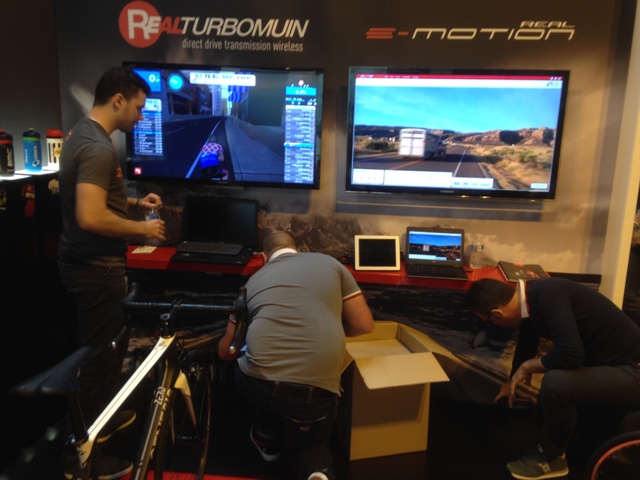 What are they looking for?

Actually, in fairness, the Elite stand was a reasonable set up. The screen on the left shows a computer game style ‘app’ to ride along with. The one on the right does a similar thing, but perhaps with actual filmed footage?

Here is the turbo they had it wired up to: 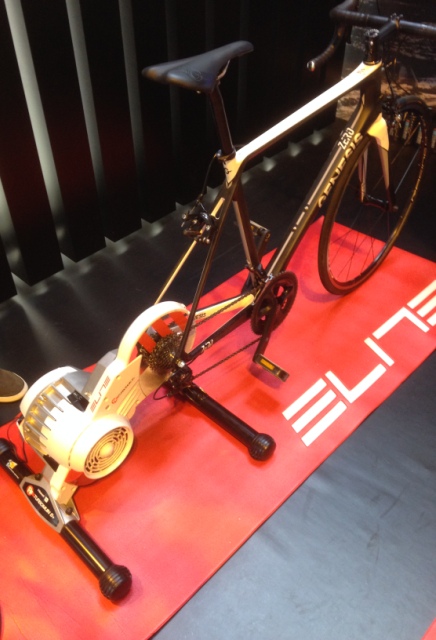 No rear wheel needed on that one.

Wattbike were in attendance, pedalling their wares… 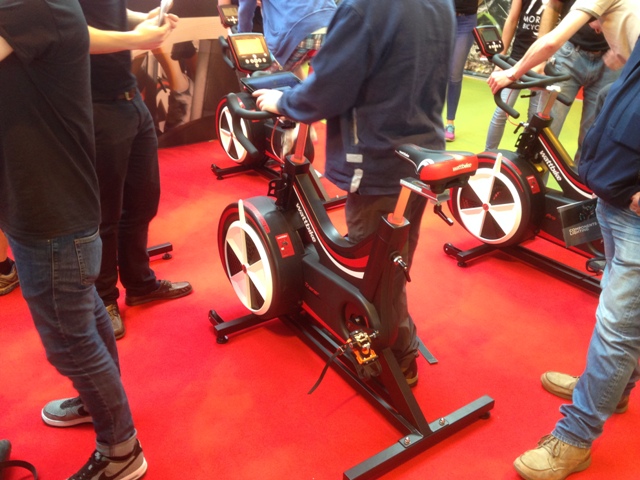 In case you were wondering what a Wattbike looks like.

And finally we have an exercise bike made on Scrapheap Challenge: 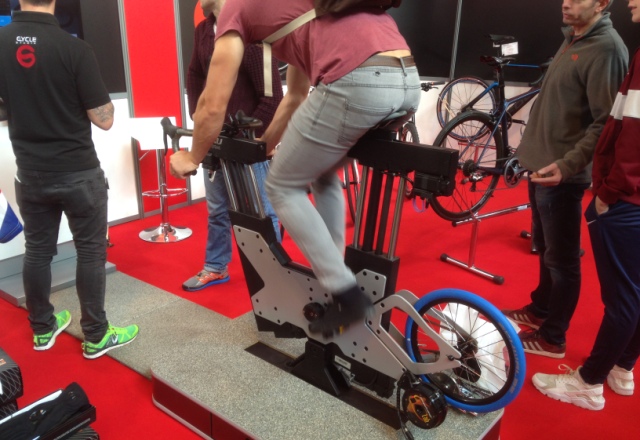 I jest of course. This is some sort of wired up bike fitting rig.

We all know I’m a (not quite in the) closet Trek fan-boy. Half of you found this blog because you were googling about the Domane.

Want to know what this year’s colours are? Viola. 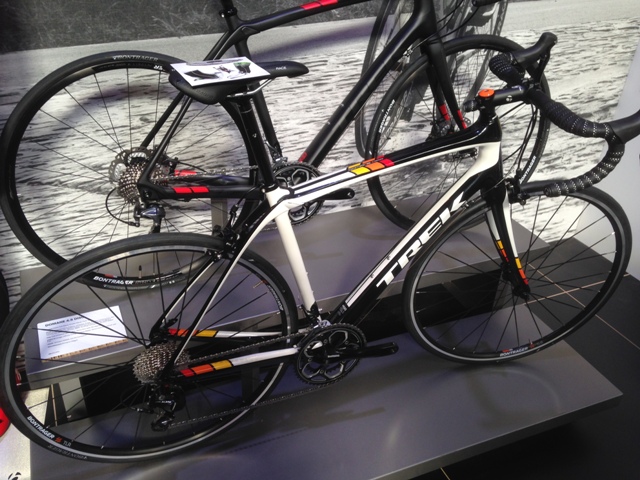 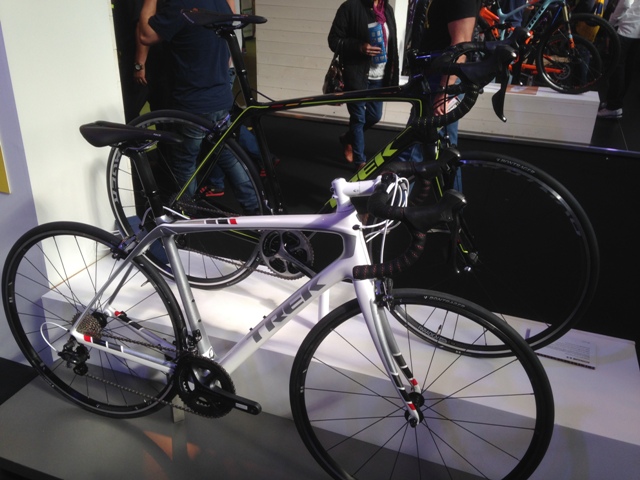 Sticking with the Trek theme, here is the Madone 9.9, which I think will set you back around £9,000. I ordered one and it’s being delivered next week. 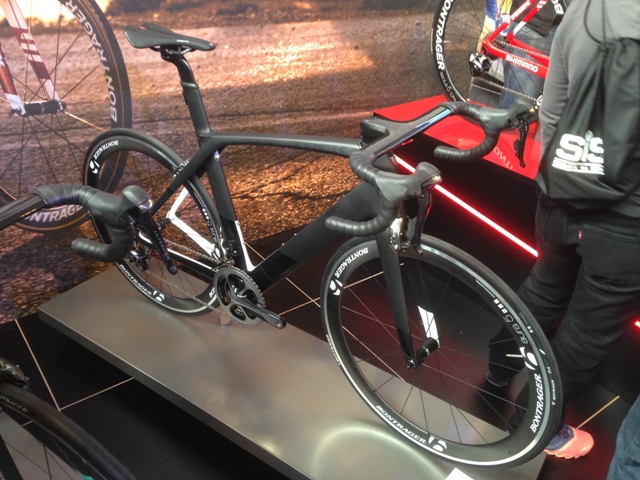 Talking of bikes that (may or may not) getting your juices flowing, here is a small selection of images to satisfy roadies of all persuasions and peccadilloes. 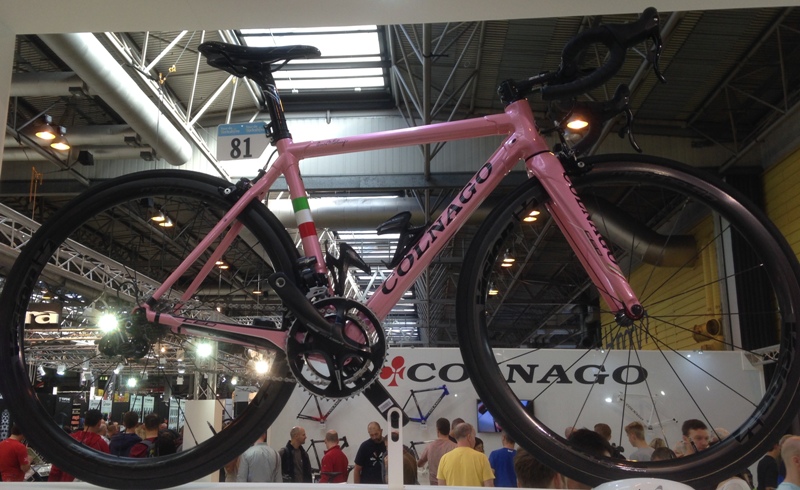 Steel yourself for this: 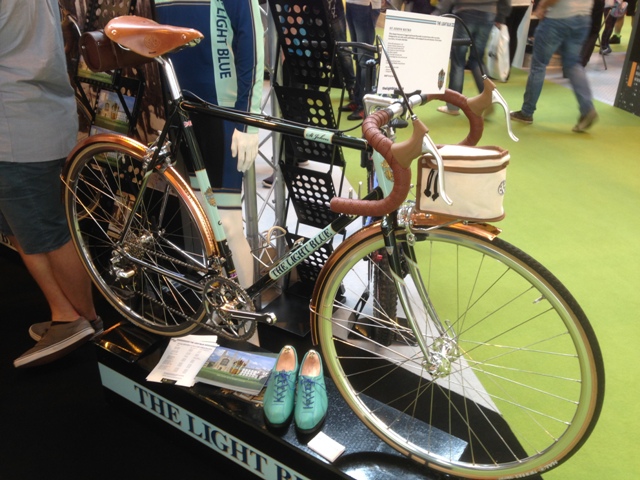 I don’t know if you can buy the Light Blue bike (or the shoes).

But you can definitely buy this one from Ribble (and for a very reasonable price): 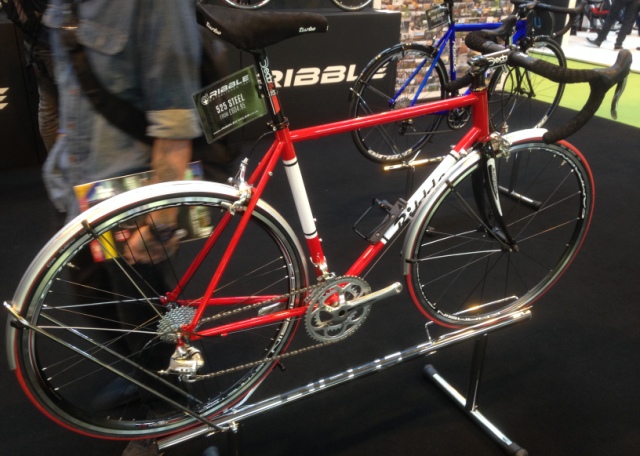 I think this looks awesome. If you can’t see the price label, it’s something like £600…

Slightly less cost effective, but a lot more French (and vertically aligned), I give you a Mondrian-themed bike from Look: 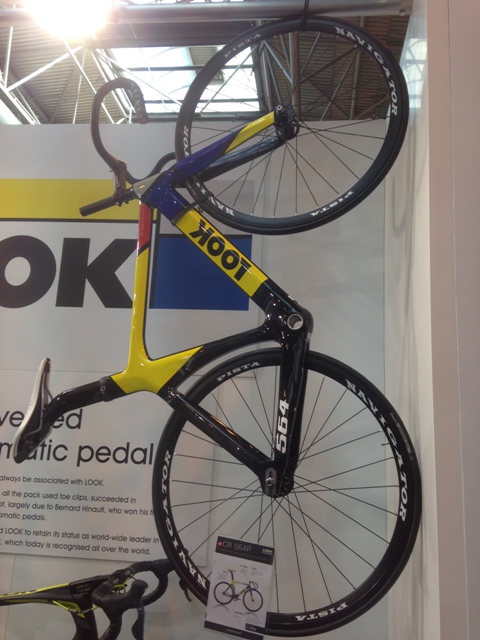 No photo tour of a bike show would be complete without a pro’s bike. In this case Alexander Kristoff’s Canyon (who he? He legend): 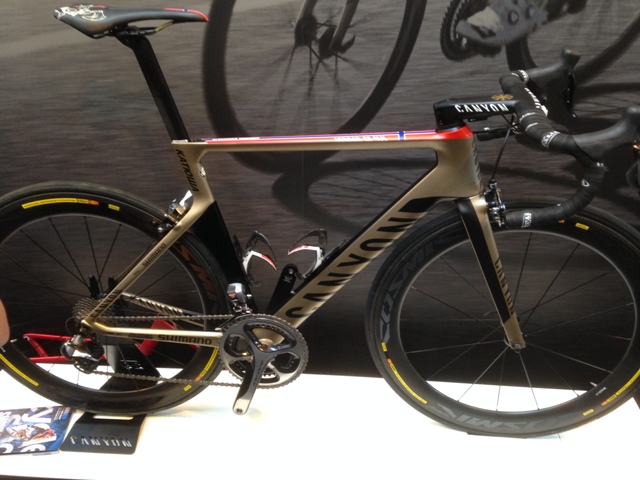 And finally, for the weirdos, some ‘custom builds’… 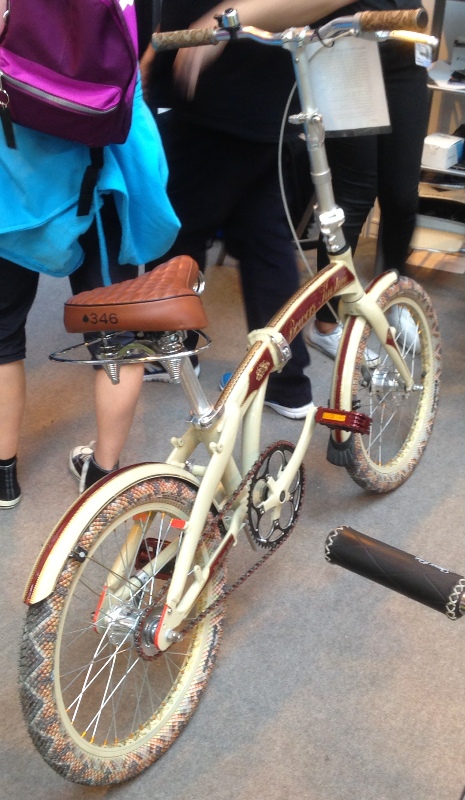 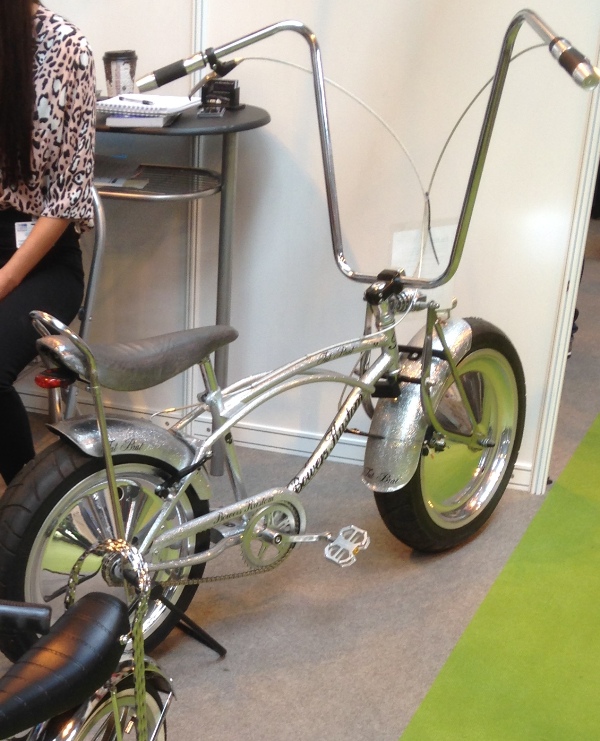 Nope. No idea how to describe this one. 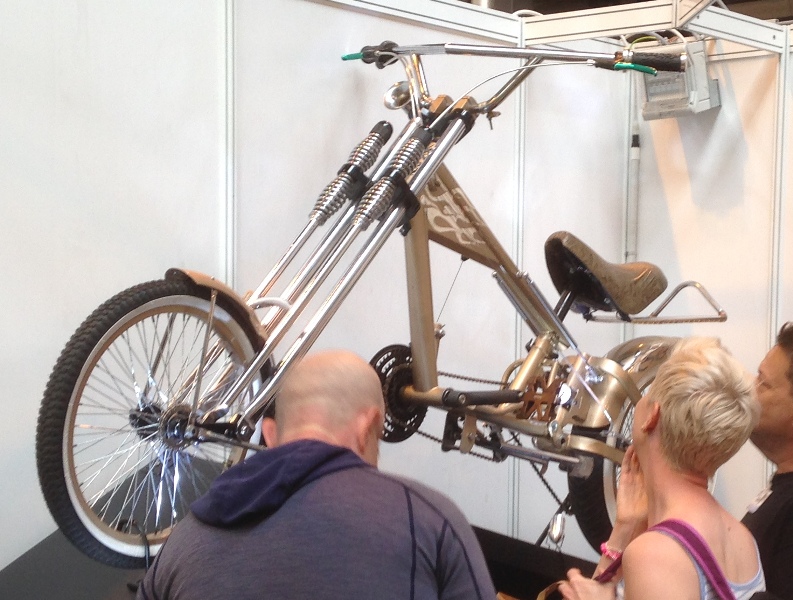 Pinarello were (understandably) making hay whilst the Wiggins shines. 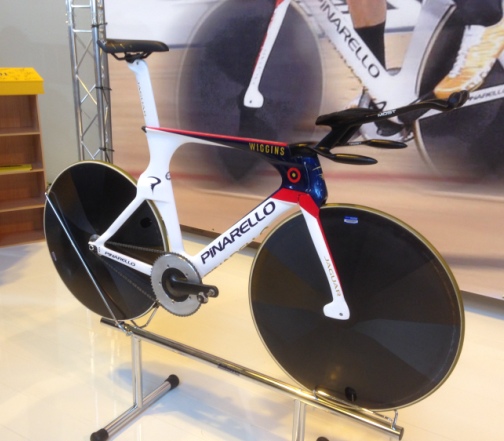 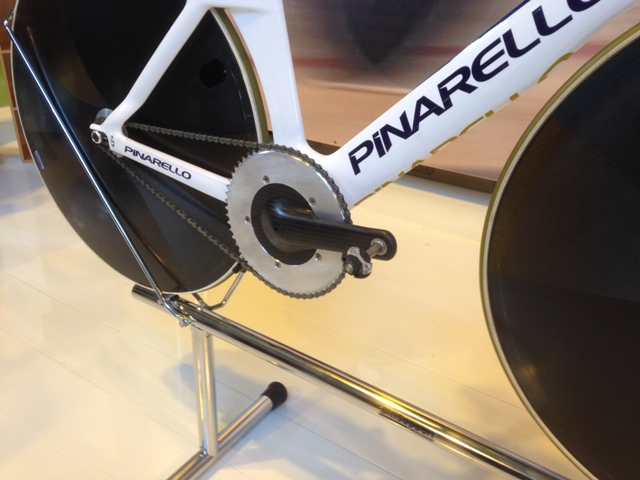 That’s right. It’s only a bloody pair of Speedplays.

Wiggins rode Speedplays to the world hour record (though not these actual ones – he used the new aero ones).

Indeed it turns out he’s worn them for years (as has another ‘pro’ cyclist you know…).

All The Cool Pros Were (And Still Are) Irish

So it turns out I had got my Irish pro cyclists from the ’80s all mixed up.

When I listen to the Eurosport commentary from Sean Kelly (he of the Franco-Irish accent), I didn’t have this guy in mind, even though I’d have identified him as an Irish former pro: 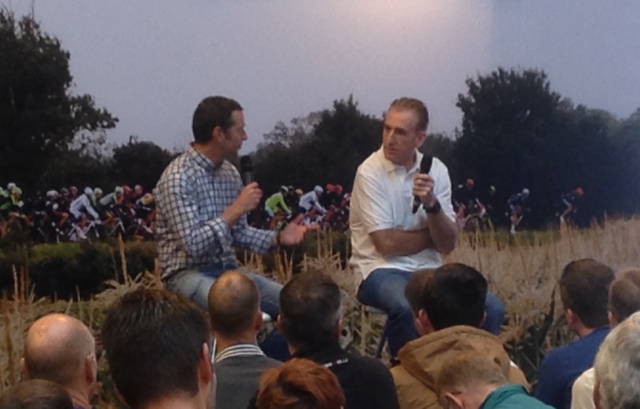 (The one on the right. The guy in the checked shirt is Ned Boulting).

But this is indeed Sean Kelly (recounting his experiences of pro cycling, including winning the Vuelta a Espana before it became cool for English speakers to win grand tours…).

It turns out I was thinking of another Irish (now ex-)pro*, Stephen Roche.

(*And father to another Franco-Irishman, Team Sky rider Nicolas Roche).

Luckily he turned up as well. With a natty pair of black suede shoes. Which was nice. 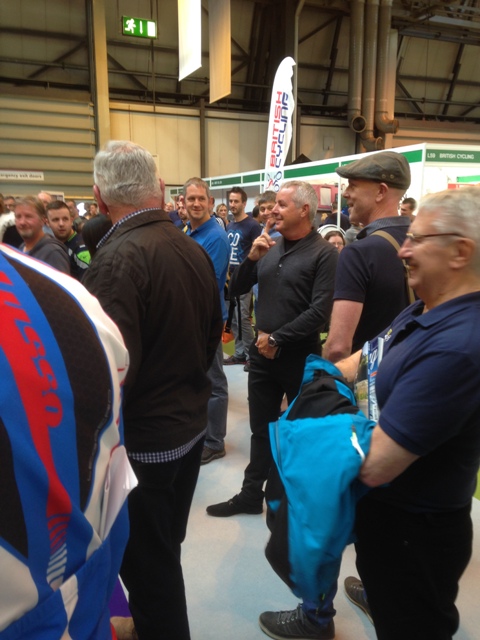 No wisdom to impart. No guidance.

No woman. No cry.

5 thoughts on “Grimpeur Goes To The Birmingham Bike Show”