It’s time for an update on my RideLondon preparation and my general cycling life, what with this being a cycling blog and all…

So what have I done?

Let’s dive into the detail.

First let’s start with the diagnosis.

I went to see Craig at Physio Form in Burton in the middle of February. Simply put, he agreed that my right leg was all kinds of wrong. For a variety of reasons my knee joint was grinding in as I walked and cycled, due to:

On the upside, Craig did say that there was no permanent damage in the knee joint itself (which surprises me given how long I’ve let this go on).

In fact, he reckons I might be able to start running again at some point (which would be amazing – though just to be clear, I promise not to become a triathlete).

Back to the downside, there’s no easy fix.

Essentially, I need to get my quadricep and related glute ‘firing’ again. The thinking being that a strengthened (i.e. normal) quadricep will stabilise my knee through my walking stride and pedalling stroke.

The other downside is that we won’t know what knock-on impacts (aka problems) will result from the changes I introduce to my posture and stance. I’ll have to suck it and see.

So the last 6 weeks, including a follow-up physio session to get a quick lesson on how to walk (!), have been spent doing specific quad strengthening exercises. Contorting my leg into the correct position (feet pointing forward would be a start) such that my knee is held correctly and that I can actually tense my quadricep (it turned out I struggled to do this in isolation).

It does feel like my muscles are strengthening. It certainly feels more natural to stand, and increasingly walk, in the ‘correct’ position.

The flipside is that I am still getting some knee pain – sometimes where I had it before (below the patella); sometimes to the, er, side. I think I can see that my right quad has grown (it has always been noticeably smaller than my left quad).

Whilst I’ve been doing all this though, I haven’t been doing a whole load of bike riding. This will have to change soon though as I embark on …

In the same way that Rimmer, the hologram from Red Dwarf, spent all of his exam preparation writing increasingly complex revision schedules, I have crafted the first cut of my RideLondon training programme.

It’s a first cut because, like all training programmes, I’ll have to adapt and flex it in order to accommodate the challenges that life (3 young kids, remarkably understanding wife, full-time job with commute) throws up.

Still, if there is no plan, then there will be no general direction towards achieving my goal – getting round the 100+ mile course and, as you’ll see below, riding with a group of mates to raise funds for a charity that is very close to us.

I’ll write more about the detail in due course, and how it’s going, but here’s a screenshot of the spreadsheet (yes! technical!): 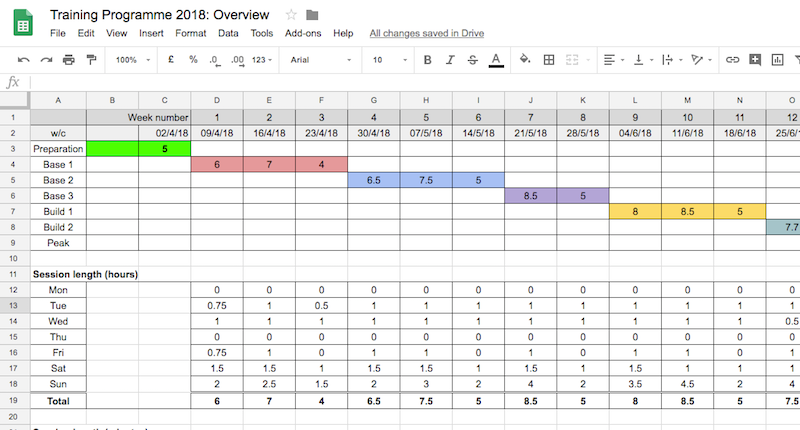 It follows the periodisation idea propounded by, amongst others, British Cycling and Joe Friel (he of the Bible…).

One thing in particular I’ve taken from Joe Friel is that each mesocycle is 3 weeks long (two harder weeks followed by a lighter one for adaptation) rather than 4 weeks.

Friel recommends this approach for ‘masters’ cyclists (aged over 40) as well as for those new to structured training. I’m close on both counts. More importantly, given the time period until the RideLondon event (end of July), three week training blocks just work better in terms of progressing through all the stages.

As you might be able to see, it starts in earnest (poor Ernest) on Monday 9th April, though I need to gear up my preparation riding before then.

The other cool development in the past fortnight is that a group of my close friends have all signed up to do this year’s RideLondon together.

They’ve all got charity places supporting Princess Alice Hospice in London. I’m joining the team with my own ballot place.

The charity is very important to all us at it cared for a very close friend in the latter stages of her life. Hopefully we can raise them a metric fugload of money (some of the other team members work in the City so they can tap up all their Yuppie friends…).

If I didn’t have enough accountability through sharing the details of my training on this ’ere blog, riding as a team, with a mission, has dialled it up to 11.

That’s It For Now

I’m pretty excited about what this year holds in terms of improving my cycling fitness. I’m a bit nervous about how my knee will hold up. My job remains quite demanding, so this will require my training to be flexible.

How is your own training going? Have you managed to get outside despite the weather? Let me know in the comments below.