But there is a silver lining to every cloud. In this case it’s an Ultegra lining.

And this nimbostratus may even have a platinum lining as we, whisper it, consider… new wheels.

So, without further ado (and another paragraph that starts with a conjunctive), I give you my bike service REPORT!

That’s Not Supposed To Happen

I’ve talked in recent posts about buying a torque wrench (which I still haven’t done yet), with the implication that I would be servicing the bike myself.

Essentially I came to the conclusion (correctly), that even armed with a torque wrench, I would still only be able to do part of the job. And even that part would be hampered by my lack of experience.

The inciting incident that drove me to book the service came after I gave the Domane a good clean a few weeks ago. Following that spruce up, as I pushed the bike along the drive, the pedals rotated forward of their own volition (well, of the volition of the rear wheel hub). Which is not meant to happen.

The concern camel (which I think is a thing) was already loaded up with my worry that the Domane’s bottom bracket hadn’t been disassembled and serviced since I bought the bike nearly 3 years ago. Given that I’ve ridden it through three Derbyshire winters on dirty Derbyshire roads, I’ve been pedalling towards a fused bottom bracket (and a new frame) for some considerable time.

The short climb that broke the camel’s front derailleur came last weekend, when an ill-timed gear change resulted in this happening: 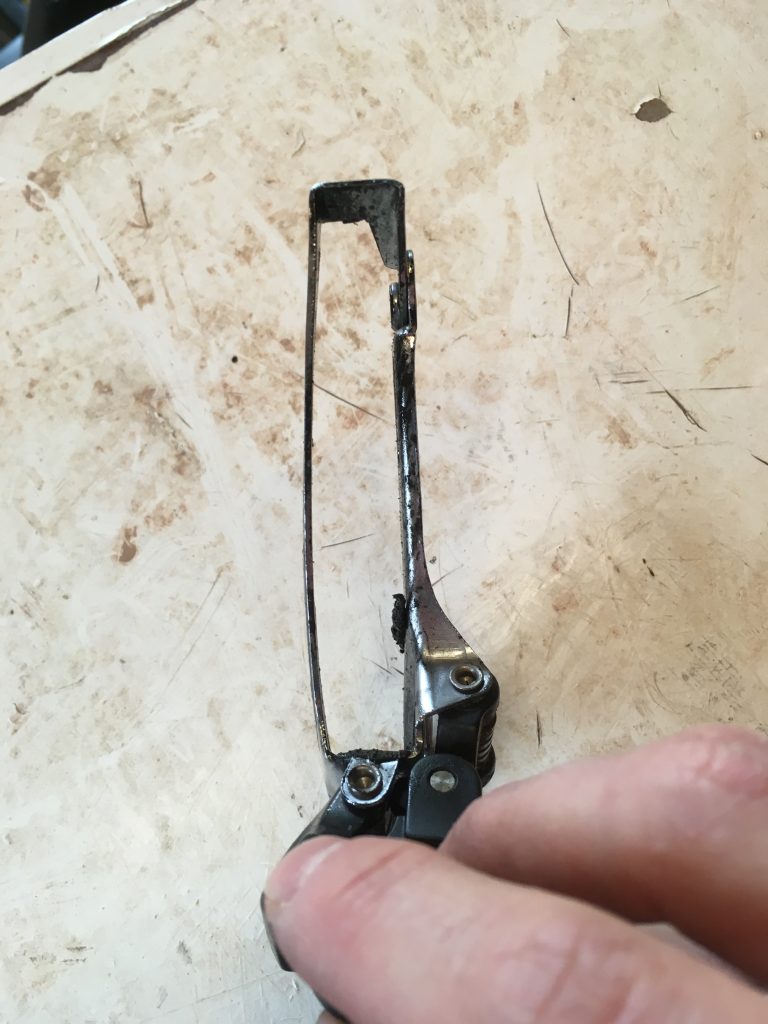 Which is a bent front derailleur.

Luckily, my earlier rear hub/bottom bracket concerns meant that I was already booked in for a service with Mark at the The Cycle Hub in Ashbourne the following Saturday. Which is yesterday, calendar fans. But not if you’re reading this post on any day other than today.

The Cycle Hub doesn’t have a website but does have a Twitter account. A brief Twitter-sation with Mark confirmed that I could now finally begin my journey towards Ultegra… 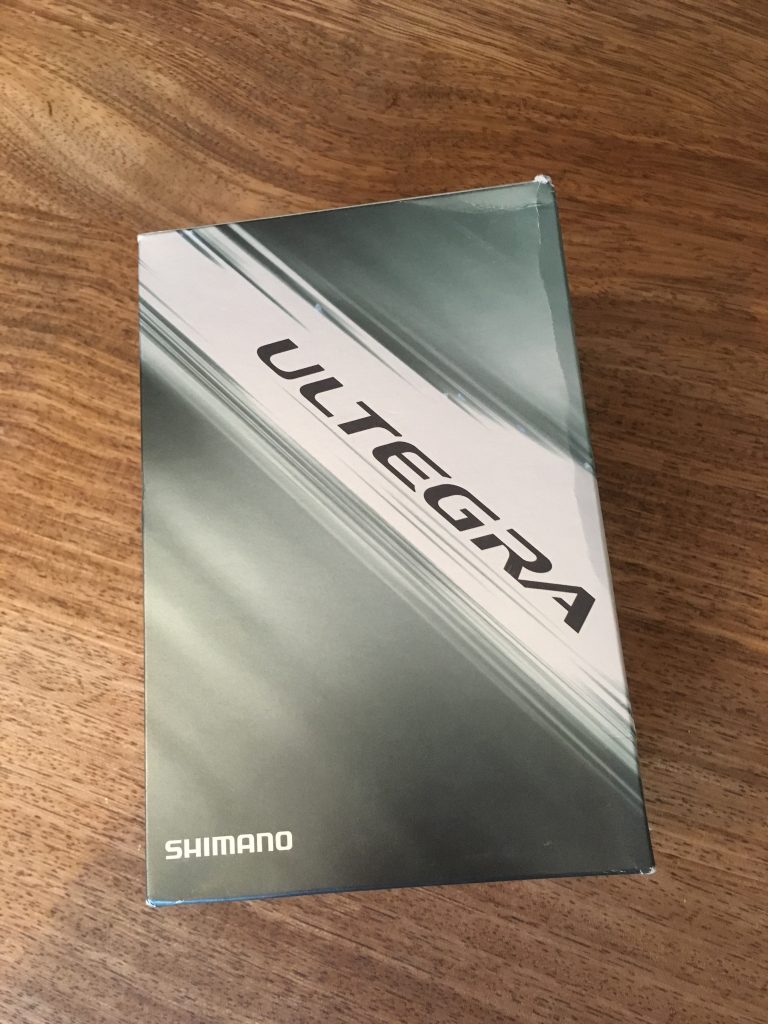 I suppose I could have simply replaced the derailleur witha new 105 version. But what’s the fun in that.

In any event, it turns out that the cost difference between an Ultegra and 105 front derailleur is about £5. £5 for all that performance improvement…

Given the need to get the part quickly (without overpaying for delivery), I ordered it from Evans Cycles and used ‘Click and Collect’ to get it delivered to the store in Birmingham. Which just happens to be a 5 minute walk from my office.

The important thing here was to make sure I ordered the 10-speed version (given that I have 10-speed 105), rather than the newer 11-speed Ultegra model (or the Di2 version, which is, clearly, very incompatible). It looked like this. 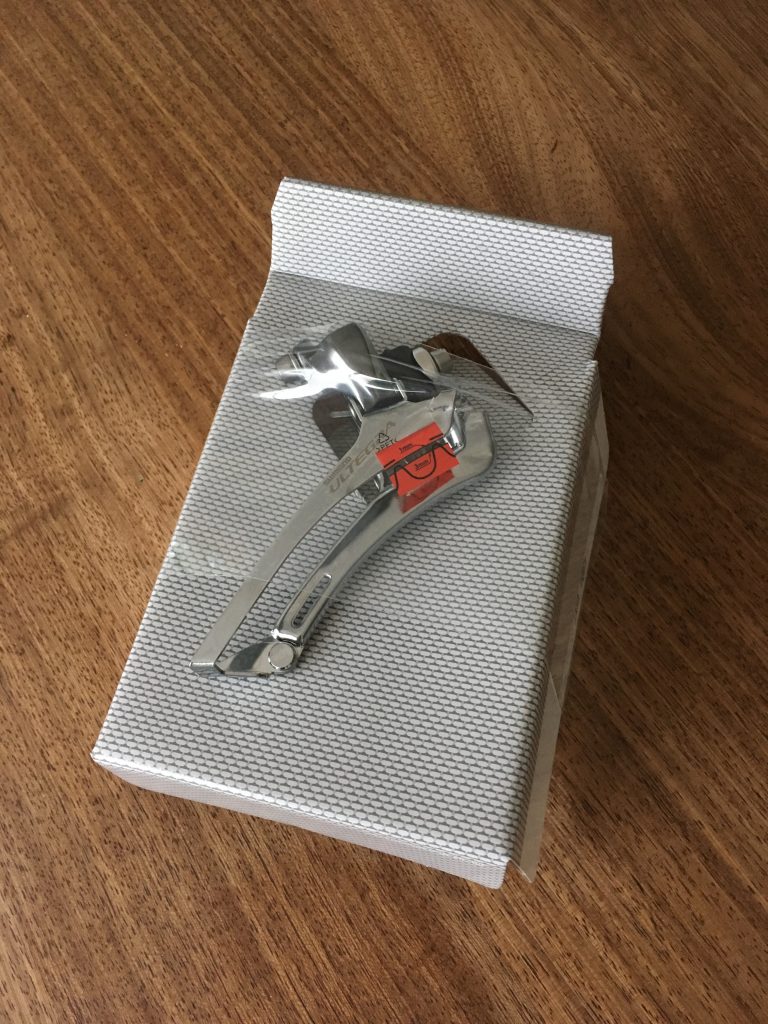 Suddenly Shimano’s naming (or rather numbering) conventions become quite useful.

My old derailleur came from the 105 family of components known as 5700. So I needed an Ultegra derailleur from the 6700 family.

Braze On Versus Band On

One last (unnecessary?) photo of a new derailleur…. 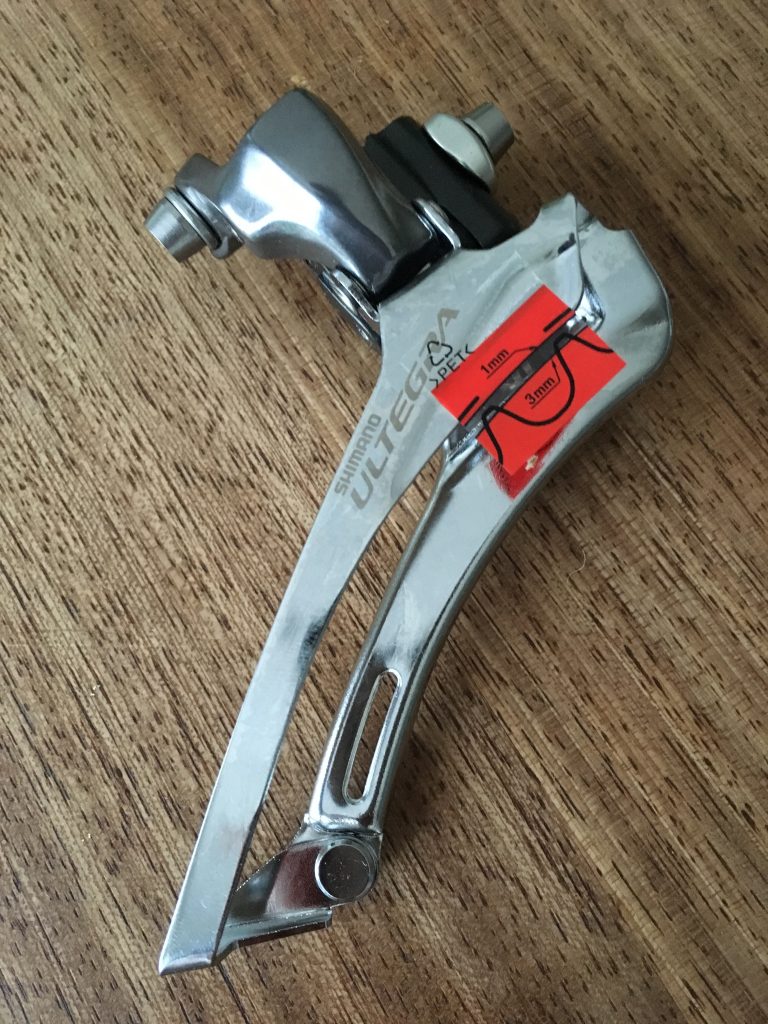 … so that I can mention that this is a ‘braze-on’ version (the bolt at the top right of the unit – top middle of this photo – attaches to a specific mount on the bike frame). This is as opposed to it clamping around the seat tube (known as a ‘band-on’). If you’re upgrading along at home, make sure you get the right one for your frame.

In the distorted world of road bike ownership, the line between good news and bad news is sometimes blurred. And sometimes entirely reversed in terms of emotional response.

Mark’s immediate prognosis of my seized rear hub is terminal. A hub that turns the pedals rather than freewheeling is not a hub that is much more for this world.

The wheels on my Trek Domane are the original ones that came with it, a pair of bog-standard Bontragers, which were no doubt specced to keep the bike below a certain price point, rather than for performance.

So, do I source a replacement hub, and pay for the labour in order to restore the wheel back to its former ‘glory’, or do I take the nuclear option and buy a new pair of (better) wheels?

The question answers itself…

I’ve been neglecting my bike.

The chain is cloyed with gunk.

I’ve let chain wear get so bad that it is a full 1% longer than it’s original length (you should replace chains at 0.5%).

As a result, my cassette is done for. My chain rings are a bit ‘shark toothy’ (technical term), denoting that they too are a bit on the chucky outy side.

And yet. And yet. Perversely I see this as a positive.

Now I can add a cassette and chain to the list of Ultegra components on my bike. This will surely add another couple of marginal gains to the marginal gains cupboard. 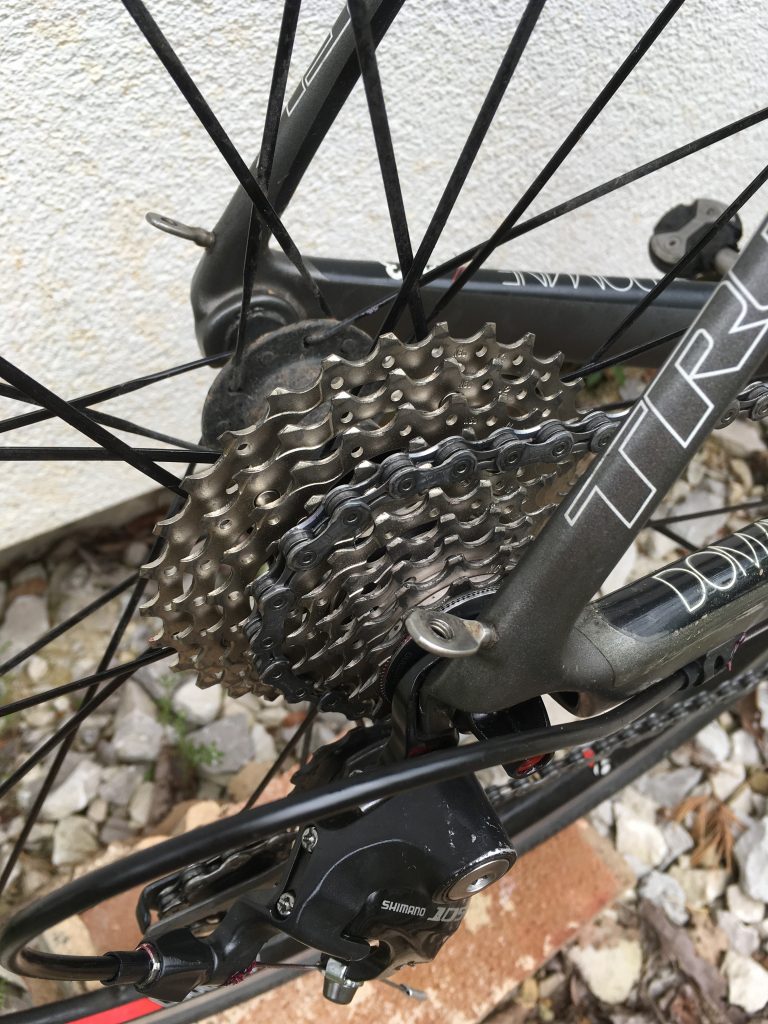 (As an aside, to keep a 10-speed cassette with a 30-tooth largest cog, I think an upgrade to Ultegra is mandatory. The Tiagra one that came with the bike is no longer made).

Mark reprimands me in the softest possible terms about my (chain) hygiene problems and advises that he always fits a quick link to new chains. Thus a chain can easily be removed for degreasing (hint: which should be done regularly). 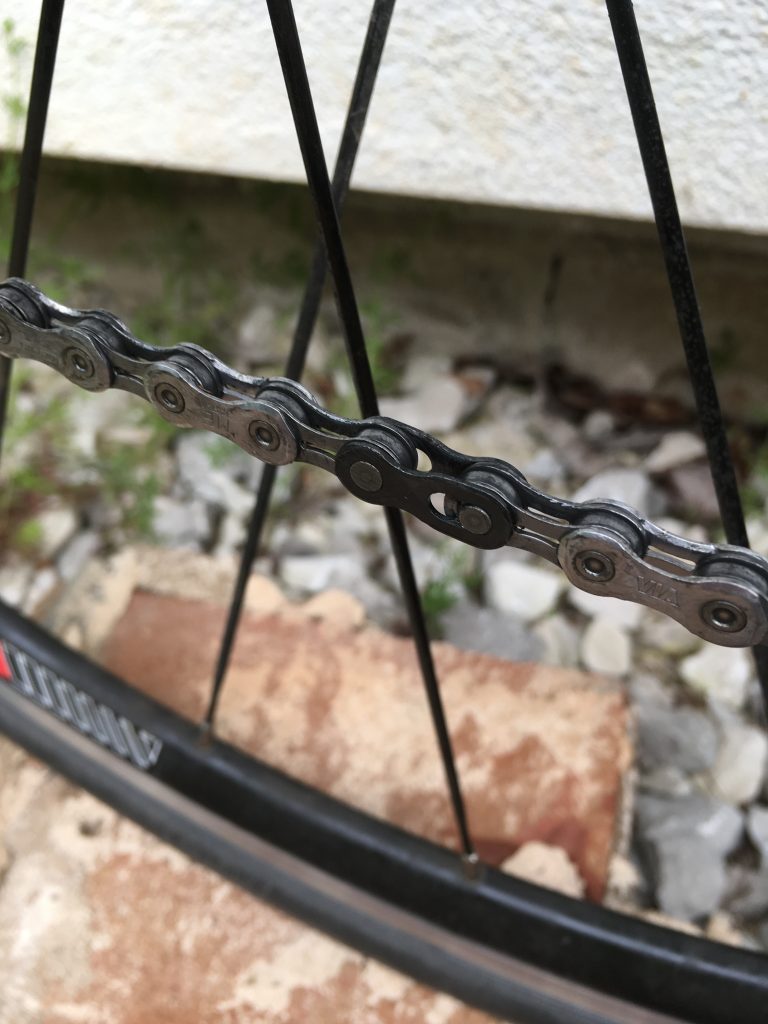 We decide to leave the chain rings for now. These will need replacing soon though, immediately prompting the mental machinations that will find me justifying a full upgrade to an Ultegra chain set versus a much cheaper set of replacement chainrings (which are barely even 105).

I sit down at the computer with a coffee (premium instant – only the very best for this important work).

I start to scribble notes. Shimano. RS31. Mavic (who make the roundest wheels). Fulcrum or (whisper it) Campagnolo.

A wealth of blog postery presents itself. Then. Disaster.

A series of Twitters from Mark at The Cycle Hub.

One, he doesn’t have my number (hence why he is Twottering). Two, I don’t need new wheels.

The problem isn’t the free hub. There is some over issue around the cassette lock ring catching. This will be sorted as he takes apart and services the hub.

This Is Starting To Get Overly Dramatic

So let’s take things back to a (Sir) Dave Brailsford level of emotion.

Mark completed the service. I watched the penultimate stage of the Criterium du Dauphine on ITV4. I went back to pick up the bike. 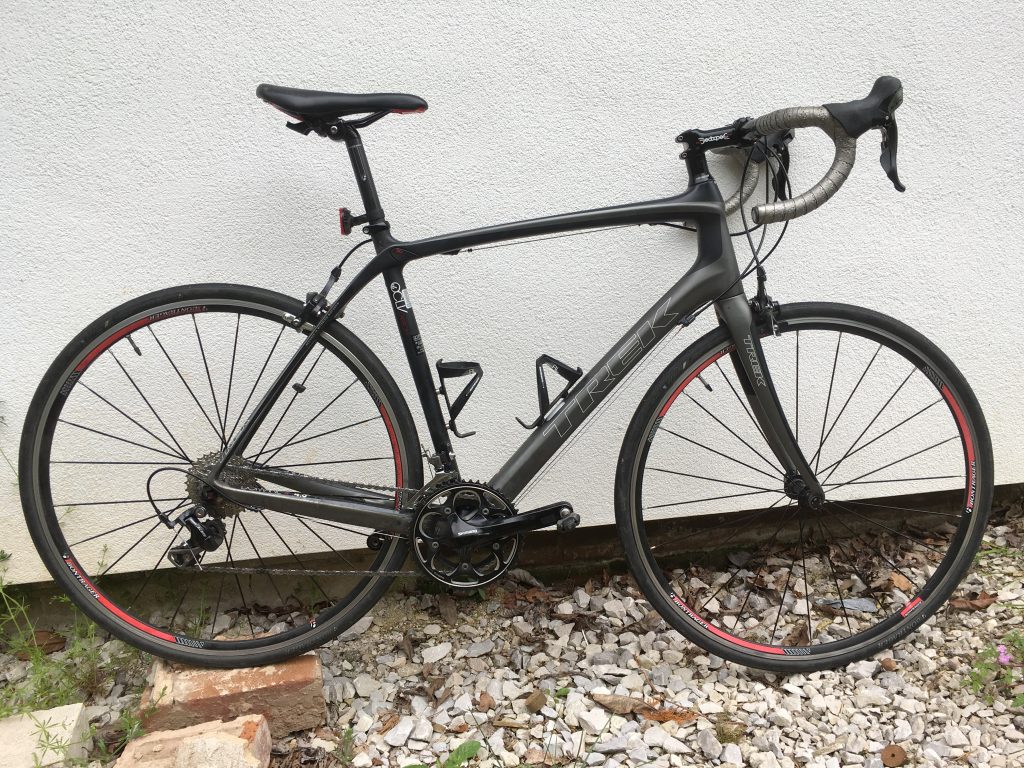 Mark ran me through everything he’d done. As a testament to his OCD, not only had he tightened every bolt to its optimal torque level, he’d rotated the spacers on my stem so that the FSA logos faced out at exactly 90 degree angles from the bike. And he’d serviced all the important things as well.

My bottom bracket was fine (just to get all of you off your tenterhooks). As was the one on the bike (yak yak yak).

Given the type of bottom bracket on the Trek Domane (pressed directly into the carbon, with no plastic shell), I will need to keep an eye on the cranks for any ‘play’ in them.

(If there is play, this means the axle will be proscribing a wider circle as it spins, potentially wearing down the carbon.)

And then he dropped the bombshell.

I WILL need a new set of wheels.

Whilst the hub isn’t knackered, there are signs of distress. There were signs of pitting around the axle cones. The old bearings (which Mark replaced) were worn and dull.

It’s not urgent, but I should think about getting a new hub body. Or new wheels.

And I don’t need to be told twice!

Take that nascent research out of the ‘to shred’ pile. Gird the loins of your bank account. Carbon rim job here I come.

So it’s back to the research board.

And I have a bit more time to revel in the selection process, rather than being rushed by the need to get the bike on the road.

It’s safe to say there will be future posts about wheel types and my selection, as I delve into this mysterious world.

The guff I’ve written above represents just a tiny percentage of the information and advice that Mark provided me with before, during and after the bike service.

The work was done to the very highest standard (even to my barely-trained eye). Little things (extra grease in the shifters that will over time work down the cable housing; new higher quality cable) speak to a top notch job overall.

Look at the extensive notes he gave me: 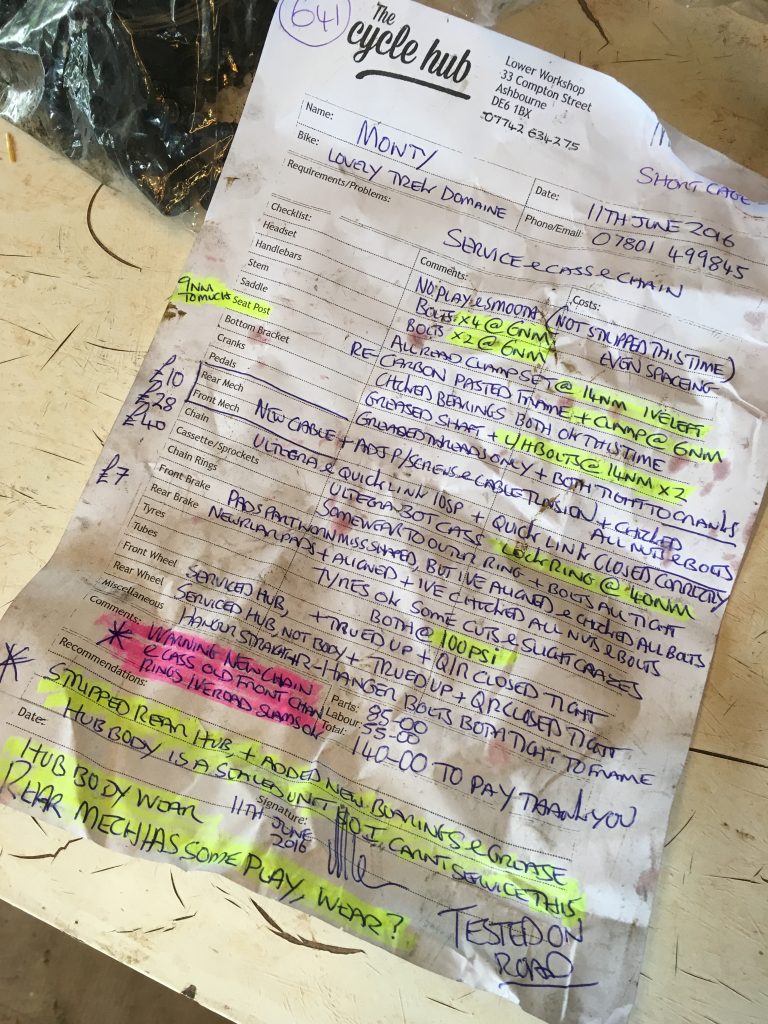 And all at an extremely reasonable price.

If you live anywhere close to Ashbourne (even within an hour radius), you should get Mark at The Cycle Hub to fix or service your bike.

That’s it. The Trek is newly serviced. It’s now a 105/Ultegra hybrid. 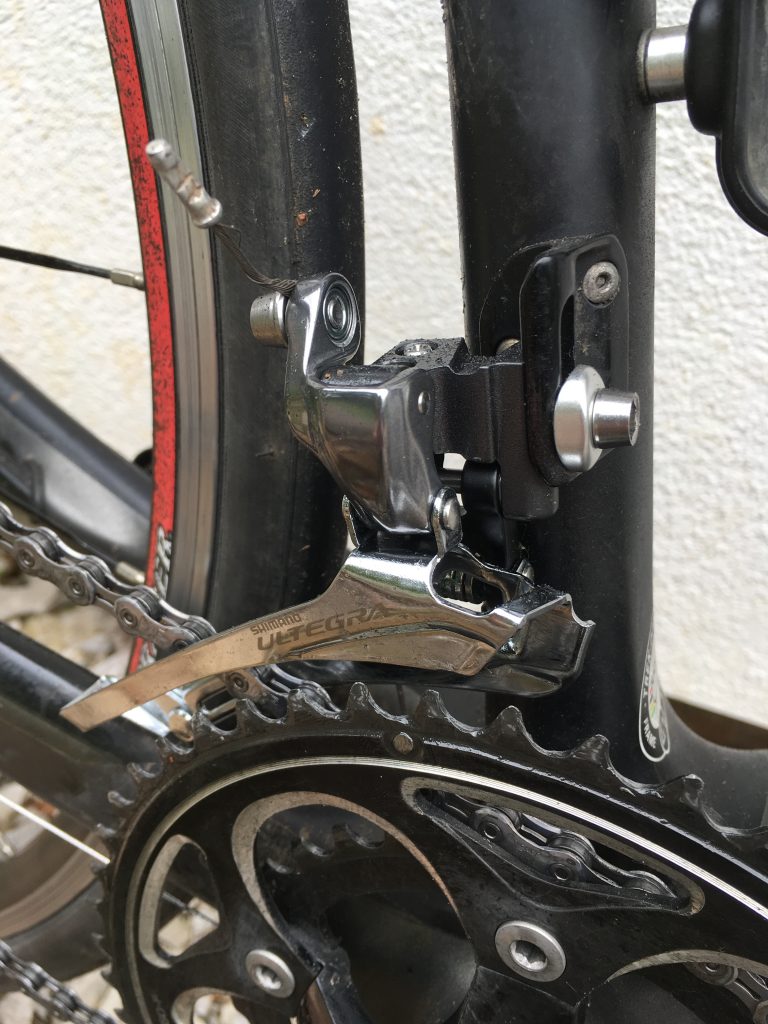 I’m off to buy a chain quick link release tool (plus a spare quick link for the saddle bag – making sure I get the ones for my 10-speed chain).

Also, I do solemnly swear to clean my drive train more frequently and diligently than I have in the past.

I think we can all learn a little from the lessons in this post. Please to discuss in the comments, ja?

24 thoughts on “Service Course: In Which Our Hero Starts To Upgrade From Shimano 105 To Ultegra (And May Need To Buy New Wheels)”